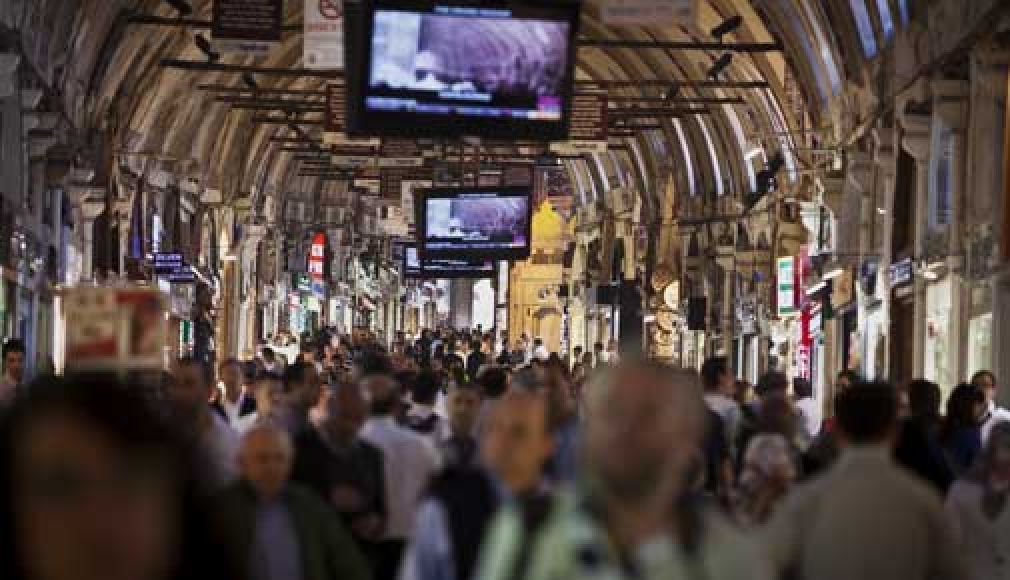 IN THE PICTURE: Inside the busy Grand Bazaar in Istanbul with tourists and local Turkish people prior to Anzac Day on April 26 2012 in Istanbul Turkey.
Rate this item
(1 Vote)

Over 2,500,000 British nationals visit Turkey every year. Take out comprehensive international private medical insurance and travel insurance before you travel to Turkey.

2 explosions near the main Ankara train station in the Ulus area on 10 October 2015 where at least 100 people were killed and more than 180 injured.

19 August 2015 an incident involving gunfire in an attack on Turkish national police guards stationed outside Dolmabahçe Palace, Istanbul. 10 August, 2 people open fire outside the US Consulate-General in Istanbul.

Terrorist group Teyre Azadiye Kurdistan has claimed responsibility for a mortar attack on Sabiha Gokcen airport in Istanbul while the airport was closed for the night on 23 December 2015. The Turkish authorities have increased security measures at airports in Istanbul in response.

Extremist groups based in Syria including ANF (Al Nusra Front) and Daesh (formerly referred to as ISIL) have the capacity to carry out attacks in neighbouring countries, including Turkey. Media reports suggest that terrorists could target areas throughout Turkey, including Ankara, Istanbul and areas close to the Syrian border.

Daesh has targeted border crossings and nearby locations on the Syrian side of the border. On 20 July 2015, a suicide bomber killed 33 people and injured over 100 others in Suruc, Sanlurfa province near the Syrian border. This attack is believed to have been carried out by individuals associated with Daesh. Daesh is also believed to have been responsible for the 10 October 2015 suicide bombings in Ankara, which killed over 100 people. The Turkish government have said that Daesh was responsible for the 12 January 2016 attack in Istanbul in which 10 foreign tourists were killed.

Turkey shares a long border with Syria. Thousands of foreign nationals, including some British nationals, have used Turkey as a transit route for joining terrorist groups including ANF and Daesh in Syria.

There’s a domestic terrorist presence in the south east of the country including in Van, Bitlis, Bingol, Elazig, Mus, Batman, Erzincan, Diyarbakir and Agri provinces. In December 2012 talks began between the Turkish Government and the Kurdish aligned PKK (proscribed as a terrorist group in the UK), during which the PKK observed a ceasefire. However, following the Suruc bombing on 20 July, the ceasefire ended when the PKK killed 2 Turkish police officers.

15 August is the anniversary of the first PKK attack against Turkish government installations. Historically, this anniversary date has prompted an escalation of violence by the PKK and other splinter groups. Since the end of July there has been an intensive period of violent incidents in Turkey’s south-east and eastern provinces. The vast majority of these incidents have been PKK attacks on Turkish security forces, their premises and vehicles, in which many members of the armed forces and police have been killed and injured. There have also been attacks on infrastructure (eg oil pipelines, dams) and incidents in which civilians have been affected. The government has responded with arrests of PKK suspects in Turkey and air-strikes on PKK positions in northern Iraq.

Between approximately 30 March and 20 April, there are several dates significant to the DHKP/C, starting with the 30 March anniversary of their founding which may have been linked to previous attacks. 19 December is also recognised as an important date around which the DHKP/C may be active.

Be vigilant, monitor media reports and keep up to date with the travel advice.

There is considered to be a heightened threat of terrorist attack globally against UK interests and British nationals, from groups or individuals motivated by the conflict in Iraq and Syria. You should be vigilant at this time.

There is a threat of kidnapping near the Syrian border in Turkey.

Terrorist groups operating in Syria, including those like Daesh who routinely use kidnapping as a tactic, are present in the Syrian border areas and are capable of conducting kidnappings from across the border. Daesh and other terrorist groups view those engaged in humanitarian aid work or journalism as legitimate targets. If you’re kidnapped, the reason for your presence is unlikely to serve as protection or secure your safe release.

UK FCO advise against all but essential travel to the provinces of Diyarbakir and Tunceli.

A temporary Turkish military restricted zone has been imposed for the Mount Ararat area. No permission is being given for parties to enter the area, nor to climb the mountain. Other temporary military restricted zones have been established in eastern provinces. Don’t attempt to enter these zones. There may be some disruption to travel in these areas.

More in this category: « Turkey: Explosion In The Sultanahmet District Of Istanbul Turkey: FCO Advise Against All Travel To City Of Diyarbakir »
back to top

LOCATION: Turkey is located in Southeastern Europe and Southwestern Asia. Bordering the Black Sea, between Bulgaria and Georgia and the Aegean Sea and the Mediterranean Sea, between Greece and Syria.