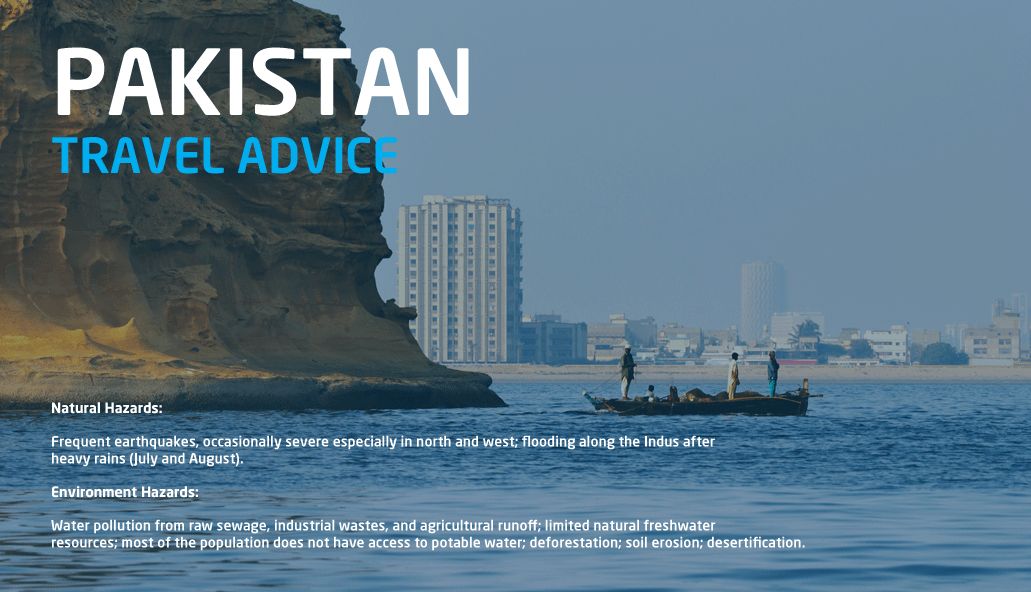 A terrorist attack in the Gulshan Iqbal Park area of Lahore on 27 March 2016 resulted in a large number of fatalities; you should follow the advice of local authorities and avoid crowded areas, as these can be targeted by terrorists; on 27 March 2016 protests in central Islamabad and Karachi by supporters of Mumtaz Qadri led to clashes with security forces; protests are ongoing in the Constitution Avenue area in Islamabad and the areas around the residences of the Governor and Chief Minister of Sindh (in the Saddar area) in Karachi; you should avoid all protests and follow the advice of local authorities.

Pakistan is in a major earthquake zone and remains at risk from further earthquakes, aftershocks, landslides and flooding. You should familiarise yourself with safety procedures in the event of an earthquake.

There is a high threat from terrorism, kidnap and sectarian violence throughout Pakistan. There is a heightened threat of terrorist attacks, and kidnapping against western nationals in Pakistan.

A terrorist attack in the Gulshan Iqbal Park area of Lahore on 27 March 2016 resulted in a large number of fatalities. You should follow the advice of local authorities and avoid crowded areas, as these can be targeted by terrorists.

Security forces in Pakistan remain on high alert following previous attacks. There may be increases in security force presence and restrictions on movement may be put in place at short notice.

In response to the World Health Organisation’s emergency recommendations about the spread of polio virus, the government of Pakistan now requires all departing travellers who have spent more than 4 weeks in Pakistan to produce a valid vaccination certificate at the time of their departure. This certificate should show that either Oral Polio Vaccine or Inactivated Polio Vaccine has been administered between 4 weeks and 12 months before departure from Pakistan. See this advice issued by the National Travel Health Network and Centre about protection from the polio virus.

Take out comprehensive international private medical and travel insurance PLUS accessible funds to cover the cost of any medical treatment abroad and repatriation.

If you need emergency medical assistance in Pakistan during your trip, dial 15 and ask for an ambulance. You should contact your insurance/medical assistance company promptly if you are referred to a medical facility for treatment.

Take care when purchasing bottled water. A recent government report found a number of bottled water brands to be contaminated.